This is the summary of leftist heaps part in MAW Chapter 6.

Merge two priority queues into one can be a very hard operation to do. For binary heap, this can be done at \(O(N)\). However, we want to do better. Leftist heap is a priority queue that supports merge operation in \(O(\log N)\).

The idea for leftist heap is that we want to make the tree structure imbalance as much as possible to make merge fast. This is achieved by leftist heap property.

The number in the each node below is the \(Npl\) of that node. By the leftist property, only the left tree is leftist.

As with splay in splay trees, merge is the fundamental operation that is used to implement other operations in leftist heap(i.e., insert, deleteMin).

The key point for the merge operation are:

The following picture shows a good example of merge steps. Note that the \(Npl\) of the node in picture is 1 larger than our's definition. The blue curve represents the final swap step. 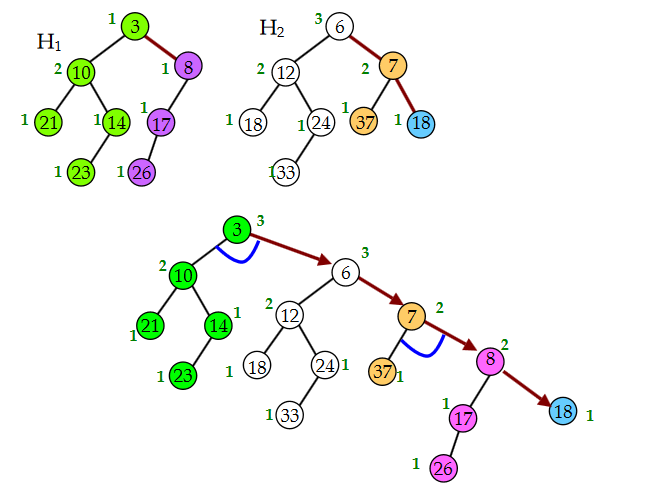 Another example can be seen from MAW 6.16 in my chapter 6 writing question post.

The actual implementation in C is below, which is copied from maw p.198:

We can carry out insertion by making the item to be inserted a one-node heap and perform a merge.

Reference section offers a link to visualize the whole insertion process. The actual implementation is on maw p.199 and copied below:

deleteMin can be done by remove the root and merge the left and subtree tree into a new leftist heap.

The actual implementation is on maw p.200 and copied below:

As described in MAW 6.22, we can perform BuildHeap in linear time for leftist heaps by considering each element as a one-node leftist heap, placing all these heaps on a queue, and performing the following step: Until only one heap is on the queue, dequeue two heaps, merge them, and enqueue the result.