Concurrency is a big topic that I'm planning to write about more for the upcoming days. In this post, I'll cover the concept "semaphore", a very important concept when we talk about synchronization. I'll walk through concept and offer an implementation of semaphore in C++ with a working example. Lastly, I'll apply golang's channel concept to help us better understand semaphore.

Lock (e.g., mutex), condition variable, and semaphore are three tightly-coupled concepts that everyone will learn about in their undergraduate OS course. Some textbook presents those concepts in the ordering shown above and talks about the missions that each concurrency primitive can achieve. In practice, however, I always find it is challenging to make choice when multiple options present for handling a specific usage scenario. The following is some rules of thumb I like to use when work with those concepts in practice:

Hopefully, by now, I can convince you why we need semaphore: it is such a indispensable tool in the pocket when we want to deal with commonly-seen concurrency situation: used as the lock to protect shared variable; used as ordering mechanism to facilitate threads execution order and concurrent event ordering.

Before we jump into semaphore, let's revisit mutex and condition variable concepts first because we will leverage those two concepts in our C++ implementation. Mutex is used to allow many threads to acess the same variable but only do so one at a time. It is a useful tool to avoid data race: a situation where two threads acess the same variable concurrently and at least one of the access is a write (e.g., Alice deposits $200 into bank with initial balance is 0; Bob deposits $100 to the same account and the final balance can be $200 2). Whenever a thread wants to modify a shared variable, it needs to acquire mutex first and release the mutex after the modification. Condition variable is used to put one thread to sleep until the condition the thread is waiting for comes true. A condition variable is an explicit queue that threads can put themselves on when some state of execution (i.e., some condition) is not as desired (by waiting on the condition); some other thread, when it changes said state, can then wake one (or more) of those waiting threads and thus allow them to continue (by signaling on the condition).

In the following, when we talk about the value of semaphore, we really mean the integer value contained inside semaphore.

Here is the pseudo code for the semaphore implementation: 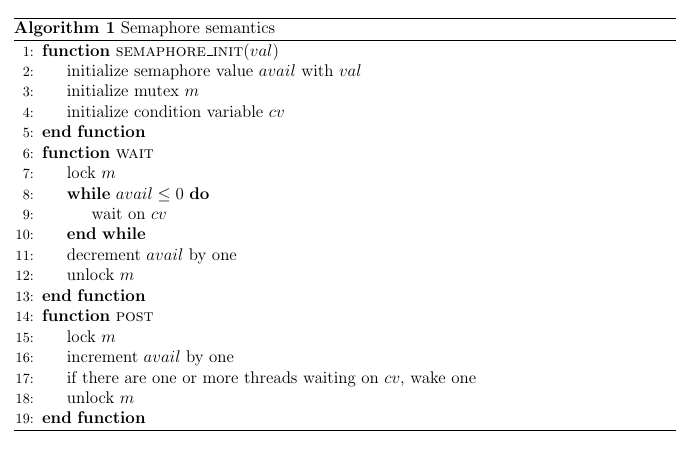 Now, let's implement semaphore in C++ with the semantics stated above.

Since we modify the integer value of semaphore (avail) that can be updated by multiple threads concurrently, we need to use mutex (m) to ensure only one thread doing the update. In addition, since threads need to wake up or wait depending on situation, we need to use condition variable (cv). The implementation itself follows some standard practice when working with condition variable.

Here, we describes the procedure in C++ context; but steps generally applied in other languages. Also, the standard practice normally done by the thread. However, since the thread simply calls post() and wait(), the practice is now presented in the post() and wait() implementation.

For thread calling post() (i.e., the thread that intends to modify the value of semaphore), post() has to:

For thread calling wait() (e.g., any threads that intends to wait on the condition variable in semaphore), wait() has to:

One might probably notice, there is no explicitly unlock or using while to check for the wait condition (avail > 0) inside the implementation. Actually, those operations happen but are hidden by the C++ library implementation:

An intuitve read of cv.wait(lk, [this] { return avail > 0; }); is the thread will wait until avail > 0, the condition contained in the lambda function argument. This can probably saves some brain power to do the expansion shown above.

As one can probably see, semaphore doesn't offer much freedom when come to how much we can customize it. The only thing that can be set by the user is the initial integer value of the semaphore (e.g., avail). In fact, that's the beauty of the semaphore: we can achieve various purposes with semaphore by initalizing it with different values. For exmaple, we can intialize the semaphore with value 1 to make the semaphore work like a lock (such semaphore is called binary semaphore):

Here is an intuitive description to understand semaphore based on this deposit example: Suppose there are five people want to withdraw money from the bank. Semaphore works like a key hanging on the bank door. Since the semaphore value is intialized with one, there is only one key hang on the door. The first person arrives at the bank is able to grab the key, open the door, and withdraw money. The rest four people have to wait in line for the key. Once the first person finishes the withdrawing, he puts the key back to the door and pat the next person's shoulder and tells her the key is available and she can go in. Now, the second person checks the key is indeed hang on the door and now she can grab it to withdraw. The whole process repeats for the rest three person waiting in the line. This describes the five threads with one semaphore situation.

We can also set semaphore value properly to order the threads execution. Consider the Leetcode Problem: 1114. Print In Order where we pass the same object Foo into three threads and let them calling appropriate print methods to print "first", "second", and "third" in such ordering without restricting which thread is assigned to print which word. For detailed example, see the problem description. The following implementation shows how we can use semaphore implementation shown above to achieve such ordering purpose: always print "first", "second", and "third" in order:

Both firstJobDone and secondJobDone have semaphore value of 0 when the Foo class is constructed. Both second() and third() will call wait() method on respective semaphore; unless post() is called before wait(), the value of semaphore will be 0, which will put threads calling second() and third() pause waiting on respective semaphore. Since first() doesn't call wait() initially, first() will be executed first. Then, firstJobDone.post() will be called, which will bring fristJobDone semaphore value to 1 and wake up the thread that wait on the semaphore: in this case, it's the thread calling second(). Since secondJobDone semaphore value is still 0, thread calling third() will continue to pause until thread with second() done the work and increment the semaphore value. The complete implementation with test can be seen here. Note that semaphore implementation used is abstracted in mysemaphore.h with implementation here. Note that for this specific question, we initialize semaphores in the Foo class. This is ok in this situation as there will be only one Foo object exists. However, a more common case is to intialize semaphores globally.

Recently, I learned about Golang for the work. The idea of using channel, the concept based on communicating sequential process (CSP), as the fundamental concurrency primitive really opens my mind (I've seen the idea in Python and Rust but Golang abuses the concept heavily). Such novel construction naturally brings new angle to re-examine the old concept: semaphore. The following examples are taken from The Go Programming Language with page number 241, 250, and 262.

The purpose of semaphore can be seen from limit parallelism: for example, no more than 20 concurrent calls to open a file. From the golang world, we can use a buffered channel of capacity \(n\) to construct the semaphore (or counting semaphore if we want to be specific). Recall that a buffered channel has a queue of elements with the maximum queue size \(n\) (i.e., capacity). A send operation on a buffered channel inserts an element at the back of the queue, and a receive operation removes an element from the front. Then the goroutine is blocked under the following conditions:

Then, conceptually, to implement semaphore, each of the \(n\) vacant slots in the channel buffer (i.e., queue) represents a token entitling the holder to proceed. Token is acquired by sending a value to the channel and is released by receiving a value from the channel. Receiving a value creates a new vacant slot that potentially allows other goroutine to send the value (i.e., acquire token). As one can probably see, with this setting, we can allow at most \(n\) sends without an intervening receive.

Implement semaphore in this way is surprisingly simple: all we need is a buffere channel and perform send or receive appropriately. The book provides an example of crawling the web (the book is from Google engineers; no wonder):

If we compare this Go's implementation with our C++ one, we can see that tokens <- struct{}{} works like wait(): if we cannot send value to the channel, we wait until the channel has some vacant spot. <-tokens works like post(): we're done and thus release token so that another goroutine can do the work. To generalize this implementation, we normally can:

To see how semaphore work as a lock (mutex) in Go, we can revisit previous concurrent balance update situation and make both deposit and check the balance concurrent-safe:

Semaphore is a really powerful concurrency construct that can work like a lock, perform ordering, and limit parallelism. I always like to semaphore first and use it exculsively without scratching the head to write sppecific condition variable + mutex combo for each kind of situation. Certainly, there will be case using conditon variable + mutex is more straightforward but I find it is very rare.