I write this post when I start to read system papers and even before I read through PebblesDB's code. My system paper reading skill is lacking and I cannot fully grasp the essence of the paper back then. Please jump to the Remarks section for a concise summary of LSM and FLSM (PebblesDB's data structure). The other sections are filled with unnecessary details and they are helpful only when you want to build something based on the paper's implementation.

A "Sorted String Table" then is exactly what it sounds like, it is a file which contains a set of arbitrary, sorted key-value pairs inside. Duplicate keys are fine, there is no need for "padding" for keys or values, and keys and values are arbitrary blobs. Read in the entire file sequentially and you have a sorted index. Optionally, if the file is very large, we can also prepend, or create a standalone key:offset index for fast access. That's all an SSTable is: very simple, but also a very useful way to exchange large, sorted data segments. 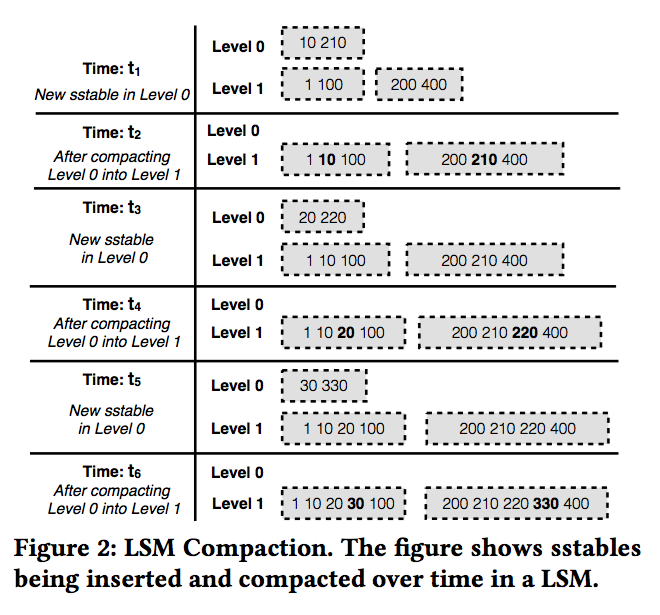 Here, I'm guessing "append" really means pointer change from one node to another. Thus, the only time IO is performed when the data is first written to sstable at a level. 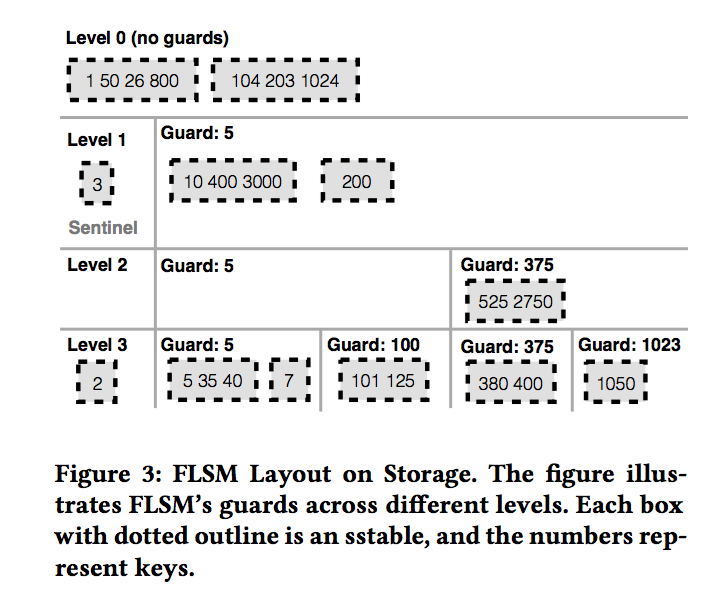 Some observations about Figure 3:

Due to the limitation of FLSM, several existing techniques are applied to improve read performance (i.e., put() and range query operations)

Log-structured Merge Tree (LSM) is a data structure that is used to provide good write performance by leverage log organizations. In details, write to LSM-based storage system is first written to in-memory log called MemTable by appending the corresponding key-value pair at the end of log. Doing the write through appending is the key differentiator from the B-tree-based storage system as we are doing the sequential write instead of the random update, which can reduce write amplification and improve the write performance.

To improve the read performance and make the system scalable to the large datasets, LSM-based storage system organizes their logs into levels. The first layer (numbered as 0), which MemTable is stored in memory. All the logs (sstables) in the rest levels are written to the persistent storage devices. Acceptable read performance is maintained by lowering down the number of logs. This is done by compactions, which merges the logs in the upper level into the lower level (i.e., merging sstables from level 1 to level 2). However, there is problem with the merging process as we need to read both logs from the upper level and lower level into memory and perform the merge. This mechanism naturally introduces the write amplifcation effect, which decreases the write performance.

To combat write amplification, Fragmented Log-Structured Merge Trees (FLSM) and its implementation PebblesDB are proposed. The key idea is shown in picture above. FLSM uses guard, which can be thought of as the key for a collection of logs. the keys in the collection of logs have to be in the range between the current guard's key and the previous guard's key. During the compaction, the the log in the upper level is split across the guard keys in the lower level. In the example shown above, 10 and 80 from level 1 is split to 10 in guard 60 and 80 to guard 100 in level 2. As one can see, this split and append avoids reading the data from lower level (e.g., level 2), which reduces the write amplification and improve the write performance. Read performance stays still thanks to the guard as we can first search guard key and then logs within the guard to locate the corresponding value for the given key.