What is a distributed system?

Here is a "cascading" definition of a distributed system:

Why build a distributed system?

There are lots of advantages including the ability to connect remote users with remote resources in an open and scalable way.

How can a distributed system be reliable?

Category of failures in a distributed system

When you design distributed systems, you have to say, "Failure happens all the time." So when you design, you design for failure. It is your number one concern. Failures fall into two obvious categories: hardware and software.

Heisenbugs tend to be more prevalent in distributed systems than in local systems. One reason for this is the difficulty programmers have in obtaining a coherent and comprehensive view of the interactions of concurrent processes.

The types of failures that can occur in a distributed system:

To design for failure, we must be careful to not make any assumptions about the reliability of the components of a system. Everyone, when they first build a distributed system, makes the following eight assumptions, which are referred as "8 Fallacies":

So How Is It Done?

We will focus on a particular type of distributed systems design, one that uses a client-server model with mostly standard protocols. It turns out that these standard protocols provide considerable help with the low-level details of reliable network communications, which makes our job easier.

The communication that occurs between the client and the server must be reliable. That is, no data can be dropped and it must arrive on the client side in the same order in which the server sent it. Types of server are:

The difference between caching and replication: Caching is similar to replication, but cached data can become stale. Thus, there may need to be a policy for validating a cached data item before using it. If a cache is actively refreshed by the primary service, caching is identical to replication.

The IP suite can be viewed as a set of layers, each layer having the property that it only uses the functions of the layer below, and only exports functionality to the layer above. A system that implements protocol behavior consisting of layers is known as a protocol stack. Protocol stacks can be implemented either in hardware or software, or a mixture of both. Typically, only the lower layers are implemented in hardware, with the higher layers being implemented in software.

There are four layers in the IP suite (top-down):

Although TCP is more reliable than UDP, the protocol is still at risk of failing in many ways. TCP uses acknowledgements and retransmission to detect and repair loss. But it cannot overcome longer communication outages that disconnect the sender and receiver for long enough to defeat the retransmission strategy. The normal maximum disconnection time is between 30 and 90 seconds. TCP could signal a failure and give up when both end-points are fine. This is just one example of how TCP can fail, even though it does provide some mitigating strategies.

Over time, an efficient method for clients to interact with servers evolved called RPC, which means remote procedure call. It is a powerful technique based on extending the notion of local procedure calling, so that the called procedure may not exist in the same address space as the calling procedure. The two processes may be on the same system, or they may be on different systems with a network connecting them.

An RPC is similar to a function call. Like a function call, when an RPC is made, the arguments are passed to the remote procedure and the caller waits for a response to be returned. In the illustration below, the client makes a procedure call that sends a request to the server. The client process waits until either a reply is received, or it times out. When the request arrives at the server, it calls a dispatch routine that performs the requested service, and sends the reply to the client. After the RPC call is completed, the client process continues. 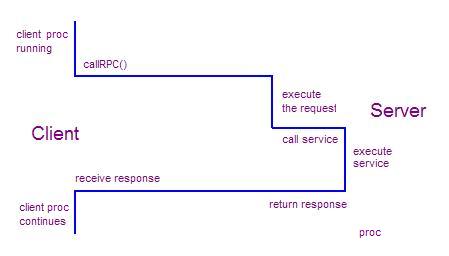 Threads are common in RPC-based distributed systems. Each incoming request to a server typically spawns a new thread. A thread in the client typically issues an RPC and then blocks (waits). When the reply is received, the client thread resumes execution. A programmer writing RPC-based code does three things:

The communication protocol is created by stubs generated by a protocol compiler. A stub is a routine that doesn't actually do much other than declare itself and the parameters it accepts. The stub contains just enough code to allow it to be compiled and linked.

Thus, an RPC application uses classes generated by the stub generator to execute an RPC and wait for it to finish. The programmer needs to supply classes on the server side that provide the logic for handling an RPC request.

RPC introduces a set of error cases that are not present in local procedure programming. For example, a binding error can occur when a server is not running when the client is started. Version mismatches occur if a client was compiled against one version of a server, but the server has now been updated to a newer version. A timeout can result from a server crash, network problem, or a problem on a client computer.

Some RPC applications view these types of errors as unrecoverable. Fault-tolerant systems, however, have alternate sources for critical services and fail-over from a primary server to a backup server.

A challenging error-handling case occurs when a client needs to know the outcome of a request in order to take the next step, after failure of a server. This can sometimes result in incorrect actions and results. For example, suppose a client process requests a ticket-selling server to check for a seat in the orchestra section of Carnegie Hall. If it's available, the server records the request and the sale. But the request fails by timing out. Was the seat available and the sale recorded? Even if there is a backup server to which the request can be re-issued, there is a risk that the client will be sold two tickets, which is an expensive mistake in Carnegie Hall.

Here are some common error conditions that need to be handled: