Week 4 and 5 mainly talks about one important learning technique called "Neural Networks". It is especially heplful when there are many features and hence, many combinations for the linear or logistic regressions. Interestingly, I studied neural networks previously when I was a student at college. It may feel different when we revisit old friend.

Below picture shows a typical neural network (I'll use NN as a shorthand). 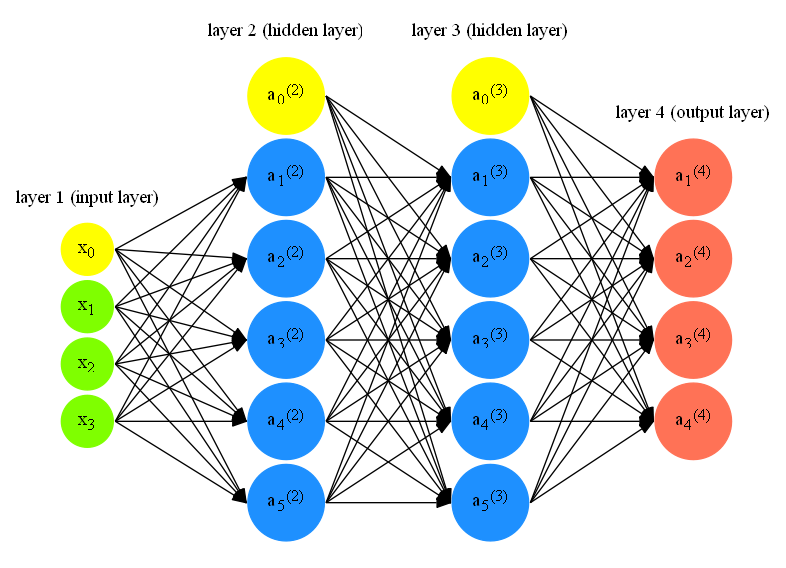 With the above notations, we have the following property:

Zero initialization is considered bad for NN (i.e. \(\theta_{ij}^{l} = 0\) for all \(i,j,l\)) because our activation output and gradient will all be identical and essentially we comput one feature in this network. That's why we need to randomly initialize the weights for symmetry breaking.

The general idea for the forward propagation is that we take in the input from previous layer, and multiply with our weights, and then apply our sigmoid function to get the activation value for the current layer. We start with the input layer and do this iteratively until we get to output layer, which its activation value will be our \(h_\theta(x^{(i)})\).

Concretely, let's first represent our input layer (with bias term) as \(x\) and define a new variable \(z^{(j)}\) as following:

One key intuition for forward propagation is that the whole process is just like logistic regression except that rather than using original feature \(x_1, x_2, \dots, x_n\), it uses new features \(a^{(L-1)}\), which are learned by the NN itself.

The intuition for the backpropagation is the following: given a training example \((x^{(i)}, y^{(i)})\), we will first run forward propagation to compute all the activiations throughout the network, including the output units. Then, for each node \(j\) in layer \(l\), we would like to compute an "error term" \(\delta_j^{(l)}\) that measures how much that node was "responsible" for any errors in our output. For an output node, we can directly measure the difference between the network's activation and the true target value, and use that to define \(\delta_j^{(L)}\). For the hidden units, we can compute \(\delta_j^{l}\) based on a weighted average of the error terms of the nodes in layer \((l+1)\).

Here is the algorithm in details:

Intuitvely, backpropagation algorithm is alot like forward propagation running backward. We can then use gradient descent or advanced optimization method to try to minimize \(J(\theta)\) as a function of parameters \(\theta\) 2.

Notice that we don't compute \(\delta_{(1)}\) because \(\delta_{(1)}\) is associated with the input layer, which are features we observed from the training examples. So, there are no "error" involved. In addition, \(.\ast\) means we do element-wise multiplication in octave.

Week 5's programming assignment on NN learning is the most challenging one I have met so far in this course. Initially, I plan to go through lots of details in terms of implementation in this section. However, after I finish the model section above and take a look at the assignment code again, I realize that the algorithms described above reflect fair accurately on how the code should be written.