Understanding assembly language is crucial for system programming. Some nasty defects of the system can only be solved by digging into the assembly level of the program. In this post, I'll revisit call stack concept as a way to understand how function call works under the cover of high-level language. In addition, this post belongs to part of future work mentioned in my post back in January.

Before we jump into the actual material. I want to briefly revisit the various ways for assembly language accessing the data in memory (i.e., addressing mode). The following table is adapted from CSAPP (2nd edition):

In the above table,

Now, let's bring our main course onto the table: understanding how function works. I'll first clear up some terms we will use during the explanation. Then, we'll take a look at the stack and understand how it supports function calls. Lastly, we'll examine two assembly programs and understand the whole picture of function calls.

Let's first consider what the key elements we need in order to form a function:

The way that the variables are stored and the parameters and return values are transferred by the computer varies from language to language. This variance is known as a language's calling convention, because it describes how functions expect to get and receive data when they are called. In this post, I'll follow C programming language calling convention.

Each computer program that runs uses a region of memory called the stack to enable functions to work properly. Machine uses the stack to pass function arguments, to store return information, to save registers for later restoration, and for local variables. The portion of the stack allocated for a single function call is called a stack frame. In other words, for each function call, new space (i.e., stack frame) is created on the stack.

The computer's stack lives at the very top addresses of memory. As the name suggests, stack is a stack data structure with the "top" of the stack growing from the high value addresses towards low values addresses. We use \(\mathtt{push \text{ } S}\) to push the source onto stack, and we use \(\mathtt{pop \text{ } D}\) to remove the top value from the stack and place it into a destination (i.e. a register or memory location). We use the stack register, \(\mathtt{\%esp}\) as a pointer to the top of the stack, which at the same time, is the top of topmost stack frame.

Pointer here means that the stack register contains an address in memory instead of a regular value. Specifically, the stack register now contains the address, which has the top value of the stack in it. With this description, we can see that to access the value on the top of the stack without removing it, we can do (%esp), which is indirect addressing mode.

When we talk about function calls, what we really care about is the topmost stack frame because that's the memory region that is associated with our current function calls. CSAPP (2nd edition) has a nice picture about what the whole stack looks like: 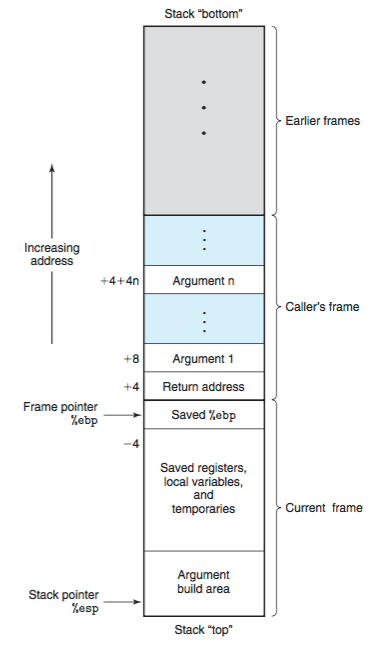 If some texts (i.e. "Saved %ebp") or layout (i.e. the order of arguments) don't make sense to you, don't worry. I'll talk about them immediately.

Before executing a function, a program pushes all of the parameters for the function onto the stack in the reverse order that they are documented. Then the program issues a call instruction indicating which function it wishes to start. The call instruction does two things:

When you call a function, you should assume that everything currently in your registers will be wiped out. The only register that is guaranteed to be left with the value it started with is \(\mathtt{\%ebp}\) (why? see "Writing a function" section below). Thus, if there are registers you want to save before calling a function, you need to save them by pushing them on the stack before pushing the function's parameters.

So, at the time the function starts, the stack looks like this:

As noted previously, the stack pointer holds the address, which contains return address as its value.

Writing a function in x86 assembly essentially contains of three parts: setup, using the stack frame to perform task, cleanup. The setup and cleanup steps are the same acrossed all the function calls. All three steps will be explained in details.

During the setup, the following two instructions are carried out immediately:

Once we are done with saving the caller's \(\mathtt{\%ebp}\), we can now setup current stack frame's \(\mathtt{\%ebp}\) by doing movl %esp %ebp. The reason for this is that we can now be able to access the function parameters that are pushed earlier onto the stack by caller function as fixed indexes from the base pointer. We cannot use stack pointer directly for accessing parameters because the stack pointer can move while the function is executing.

Once we have performed the fix setup, we can now use the stack frame to:

Save registers step is not mandatory. If your caller function (or higher-level functions) don't use all these callee-save registers, you are free to skip this step.

The function reserves space on the stack for any local variables it needs. Space for data with no specified initial value can be allocated on the stack by simply decrementing the stack pointer by an appropriate amount. Similarly, space can be deallocated by incrementing pointer. Suppose we are going to need two words of memory to run a function. We can simply move the stack pointer down two words to serve the space:

While it is possible to make space on the stack as needed in a function body, it is generally more efficient to allocate this space all at once at the beginning of the function. This way, we are free of worring about clobbering them with pushes that we may make for next function calls (i.e. push arguments and return address for the function calls contained inside the current function, which all happens in "Argument build area" in the above picture).

Suppose we save \(\mathtt{\%ebx}\) (i.e. callee-save register), and with our two words for local storage, our stack now looks like this:

When a function is done executing, it does the following three things:

Thus, to return from the function you have to do the following:

Now, we can take a look at two examples: the first one is to calculate the power given two numbers: one as the base and the other one as the power. The second example calculate the factorial of a given number, which demonstrates how the recursive function is done.

The key to understand the function call is to trace through the status of stack frame. One thing to highlight as a side note is:

This tells the linker that the symbol power should be treated as a function. Since this program is only in one file, it would work just the same with this left out. However, it is good practice.

To run the program on 64-bit platform, we need to simulate 32-bit environment by assembling and linking our program like this:

One good practice we should note is that we should always clean up our stack parameter after a function call returns. In this program, we do addl $4, %esp immediately after we call factorial in our _start.

Here are some of the resources I found helpful while preparing this article: