Disjoint Set ADT is an efficient data structure to solve the equivalence problems. It has wide applications: Kruskal's minimum spanning tree algorithm, Least common ancestor, compiling equivalence statements in Fortran, Matlab's bwlabel() function in image processing, and so on. In this post, I'll walk through this data structure in order to have the better preparation for the graph algorithms in the following chapter of MAW.

The implementation of the quick-find, quick-union, smart-union with path compression in C can be seen here and an application to solve problem in C++

The dynamic equivalence problem essentially is about supporting two operations on a set of elements where the equivalence relation is defined over:

We can model the problem like the following: the input is initally a collection of \(N\) sets, each with one element. This initial representation is that all relations(except reflexive relations) are false. Each set has a different element, so that \(S_i \cap S_j = \emptyset\); this makes the sets disjoint. In addition, since we only care about the knowledge of the elements' locations not values, we can assume that all the elements have been numbered sequentially from \(1\) to \(N\). Thus, we have \(S_i = \{i\}\) for \(i = 1\) through \(N\). At last, we don't care what value returned by find operation as long as find(a) = find(b) iff \(a\) and \(b\) are in the same set.

The first approach to solve the problem is called quick-find, which ensures that the find instruction can be executed in constant worst-case time. For the find operation to be fast, we could maintain, in an array, the name of the equivalence class for each element. Then find is just a simple \(O(1)\) lookup:

The second approach to solve the problem is to ensure that the union instruction can be executed in constant worst-case time, which is called "quick-union". One thing to note is that both find and union cannot be done simultaneously in constant worst-case time. Recall that the problem doesn't require that a find operation return any specific name as long as find on the elements in the same connected component returns the same value. Thus, we can use a tree to represent each component becase each element in a tree has the same root. Thus, the root can be used to name the set. The structure looks like below:

Since only the name of the parent is required, we can assume that this tree is stored implicitly in an array: each entry \(\text{id}[i]\) in the array represents the parent of element \(i\). If \(i\) is the root, then \(\text{id}[i] = i\). A find(X) on element \(X\) is performed by returning the root of the tree containing \(X\). The time to perform this operation depending on the depth of the tree that represents the set containing \(X\), which is \(O(N)\) in the worst case because of the possiblity of creating a tree of depth \(N-1\). union(p,q) can be done by change the root of tree containing \(p\) into the value of root containing \(q\):

There are two major improvements we can do with our quick-union: smart-union works on union operation and path compression works on find operation. Their goal is to make the tree of each set shallow, which can reduce the time we spend on find.

Smart union is a modification to quick-union that avoid tall trees. We keep track of the size (i.e., number of objects) of each tree and always to link the root of smaller tree to root of larger tree, breaking ties by any method. This approach is called union-by-size. In quick-union, we may make the larger tree a subtree of the smaller tree, which increase the depth of the new tree, which increase the find cost. The following picture demonstrates this point:

Another approach is called union-by-height, which tracks the height, instead of the size, of each tree and perform union by making the shallow tree a subtree of the deeper tree. Since the height of a tree increases only when two equally deep trees are joined (and then the height goes up by one). Thus, union-by-height is a trivial modification of union-by-size.

Path compression is performed during a find operation and is independent of the strategy used to perform union. The effect of path compression is that every node on the path from \(X\) to the root has its parent changed to the root. For example, suppose we call find(9) for the following tree representation of our disjoint set: 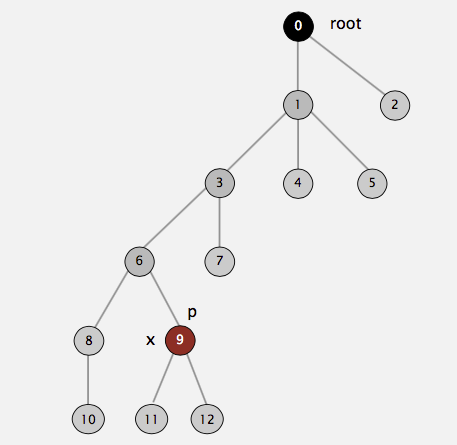 This strategy may look familiar to you: we do the path compression in the hope of the fast future accesses on these nodes (i.e., \(9,6,3,1\)) will pay off for the work we do now. This idea is exactly the same as the splaying in splay tree.

If we do analysis on smart union with path compression, the running time for any sequence of \(M\) union-find operations on \(N\) objects makes \(O(N + M\log^*N)\) 1 accesses.

The following table summarizes the running time for \(M\) union-find operations on a set of \(N\) objects (don't forget we need to spend \(O(N)\) to initialize disjoint sets):

The running time for each operation for each algorithm is following:

Given a set of N objects, support two operation: 1. Connect two objects. 2. Is there a path connecting the two objects?

Here are some of the resources I found helpful while preparing this article: